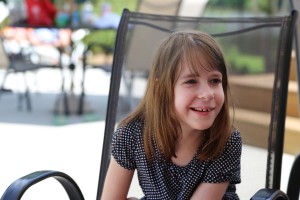 Ahhh… Summer. It’s been a wonderfully relaxing week – especially compared to the craziness that surrounds the last month of school.

Part of that craziness involved me dealing with medical providers and insurance to work out Anne’s therapy schedule for the summer. As is typical, God worked it all out perfectly – but just the opposite of how I had planned! God always knows best.

So Anne will do another round of TheraSuit therapy in June. And then she will have serial casting done in July & August.

Anne is doing GREAT! I don’t know how to describe her improvements… I just know she’s better. She’s less impulsive, more relaxed, less agitated, more focused. Eric and I are both extremely grateful for our Anne’s progress.

Anne’s Orthopedically Impaired Special Ed. class had an awards ceremony at the end of the year. Anne won several awards! I think she won four… “Most Improved in Writing,” “Outstanding Work in Phonics & Reading,” “Outstanding Work in Sight Word Recognition,” and the one I’m most proud of was “Most Improved Student in Primary Grades.” Woo Hoo!!! Anne had a fantastic year, and we are so proud of her! 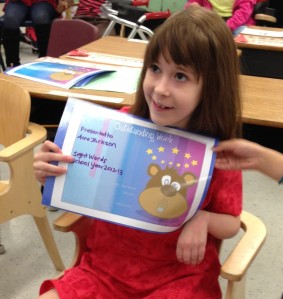 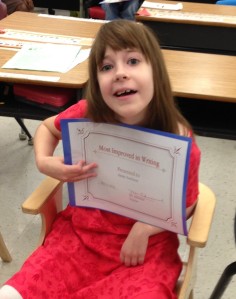 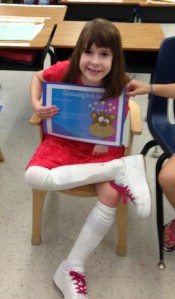 We love our Anne!

And the best news we received at the end of the year was that Anne’s AMAZING Para-pro will be returning next year! I’m so thankful for Mrs. Bush :) 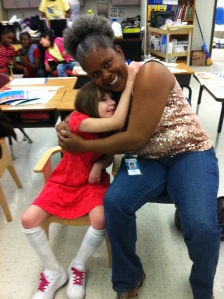 Happy Summer! I’ll post updates during TheraSuit Therapy. Thank you so much for your prayers for Anne!

6 thoughts on “Yeah for Summer!”

Welcome! I'm Kathryn Jackson, mom to a tween with a brain injury. Unpredictable is my life.