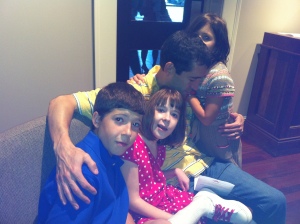 I took this picture in church this morning (when I should have been listening to the prayer!) It absolutely melts my heart. Eric is the best of the best. I’m so thankful to be married to him… But our marriage has been severely tested since the accident…

I now understand why so many marriages crumble after tragedy – especially if the tragedy concerns your children. The grief is so heavy that it can take all of your energy just to get through the day. There is rarely emotional energy left over to connect with your spouse.

Meanwhile the marriage suffers because it just takes so much more effort than it used to – and who has that much energy? It’s definitely easier to give up than to fight to sustain the marriage.

But I married someone who refuses to give up. My grief after Anne’s accident was so thick at times that it would have been easy to give up, but Eric was committed to pursue me, and God gave us the grace to fight.

Now that we’ve been through our darkest days and come out on the other side together, I figured it was time to celebrate! So for Eric’s birthday, I gave him 12 pre-planned date nights* – one for each month of the next year. Every date is different. Some are extravagant and others are just simple nights at home – but every reservation has been pre-made and pre-paid, so we have no excuse… we must go! 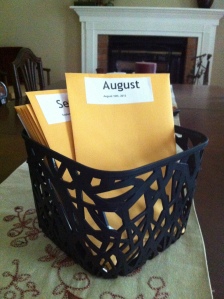 Our first date was last night. We went to the Atlanta Fish Market and then to the Aquarium. Eric said afterwards that it was rejuvenating, and that was my hope…. that as we take time to have fun together, this will give us energy to manage our little family – because parenting is harder now. Well… Everything is harder now. But that just makes life richer :)

Here’s to a great year, and the fight for a great marriage! 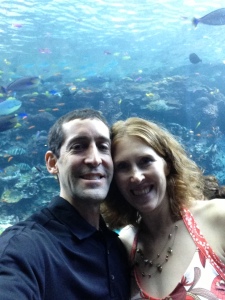 *And by the way… I stole the “date-night” idea from a friend’s Pinterest Board. Here’s the original link :)

15 thoughts on “The fight for our marriage”

Welcome! I'm Kathryn Jackson, mom to a tween with a brain injury. Unpredictable is my life.